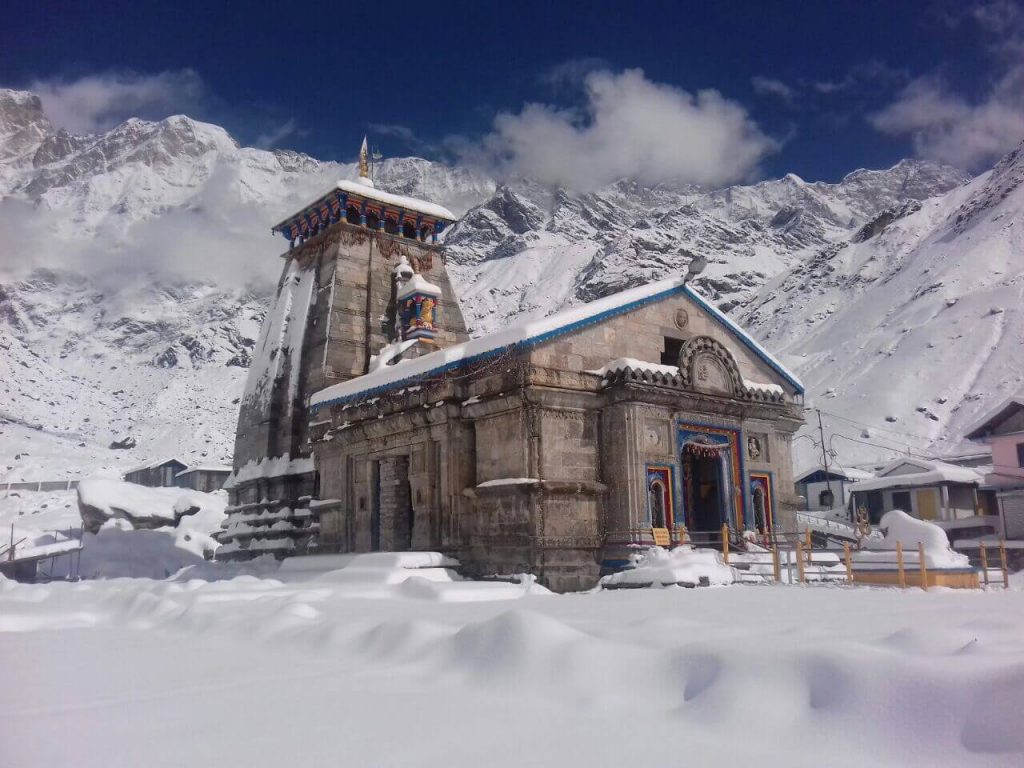 Kedarnath A place where I want to visit again and again

Kedarnath – A place of Lord Shiva. Geographically it is a very small town however it consists of the whole world in it as travelers from all over the world come to visit this astonishing and alluring beauty of nature. In life we are so busy with our daily routine and we always think to go on a vacation to some place where we can relax and get detoxed. If you guys really want to go to some place to relax I would definitely suggest this place which is situated at an elevation of 3583 m(11755 ft) in the midst of enthralling creation of nature surrounded by a fascinating snow filled mountains of Himalayan range, alongside of divine Mandakini River comes under Rudraprayag district of Uttarakhand State in India.

A breath taking view of Kedarnath

It is a religious place and one of the twelve Jyotirlingas. It is also one of the four major sites called Chota Char Dham.

I have been to Kedarnath thrice and every time I visited this place it always welcomed me with an open heart. Today I am going to share my first trip to Kedarnath.

It was after my graduation examinations, I went to Dehradun for my summer vacations as I have my relatives there. After spending a few days there, one of my friend asked me to go somewhere on an adventure trip. We started discussing which place to go? I am a religious person, devotee of Lord Shiva and a mythology lover and it was in my to do travel list to visit Kedarnath Dham so we finalized it. Unfortunately at the day of departure there was some emergency at my friend’s place, he said he couldn’t go with me so I decided to go solo. It was the month of June, I left from Dehradun around 6:00 am by bus and reached Rishikesh which took around one and a half hours. From Rishikesh I took another bus to Guptkashi, it left around 8:00 am. We had a refreshment hault of half an hour at Srinagar. Around 3:00 – 3:30 pm I reached Guptakashi, it was a long journey but I enjoyed every bit of it as almost whole of the journey is alongside Ganges river with the zigzag roads and hairpin band turns, sight of beautiful Ghats and enthralling waterfalls, mountains covered with the long trees of Chir and Oak. It was a whole new experience for me and I was really excited. By the time I had tea and snacks it was already 4:00 pm, the weather was also very cloudy and there was no point going further so I stayed in Guptakashi only.

The next day after breakfast around 7:30 am I left for Gaurikund as that is the last point for any vehicle to reach. It is 35 kms from Guptkashi and takes approximately one hour to reach. From Gaurikund to Kedarnath puri it was a steep walking trek of about 14 kms(After 2013 floods the trek has been increased to 22 kms from 14 kms, however it is not that difficult now). At Gaurikund there were options available for old age people or who do want to walk such as pony, palanquins, mules, Kandis, palkis. I chose to walk as adventure was one of the motives of my trip. Throughout the way after every 100 mts – 200 mts there were shops for tea, snacks, maggie and refreshments. I took a rest of about 30 minutes at Rambara which is in the middle of the total trek. The trek was really tough as it was very steep and it was raining in between. I took another hault of about 20 minutes at Garud Chatti. Around 500 mtr – 700 mtr before Kedarnath Puri the trek became flat and it was not that difficult. I could see the puri from there. As I was reaching near I started feeling relaxed, all the tiredness, exhaustion it was just gone. I think that was the beauty of the place, I felt like I am in the lap of God. The sight was really breathtaking, the Mandakini river was flowing alongside and there were those huge mountains all around. It took me 6 hours and 30 minutes to reach there.

I would say I was really fortunate that the place where I had to stay was just on the right side of the temple, that was one of my relatives’ houses.

I was astonished to have a sight of  the temple as it is a unique and exquisite creation in itself. It is made of big blocks of rocks, the kind of engineering and tactics they used so many centuries ago is an example of wonderful architecture.

It is said that after the battle of Kurukshetra (Mahabharat) Pandavas were very downhearted and full of guilt for killing their own kin and loved ones so they went to Sage Vyas for advice. Sage Vyas suggested they should go to Lord Shiva to seek forgiveness. Pandavas accepted the suggestion and started their journey to find Lord Shiva. As the Himalayas are considered to be a dwelling place for Lord Shiva so Pandavas also went there. Before Pandavas could reach there Narad Muni reached to Lord Shiva and informed him that Pandavas are coming to seek forgiveness and if you forgive them than in future generations in Kalyug people will do the same. They will fight with their own family and then ask for forgiveness from you.

Lord Shiva understood the situation, he turned into a bull and hid among the cattle on the hill. Yudhisthira was considered to be the most intelligent one among all the five Pandavas, somehow he managed to understand that Lord Shiva is one of the bull among the cattle. He asked Bheema to put his one leg on one hill and another on another hill, the bull which will not pass through under your legs will be Lord Shiva. That is how they managed to recognize him however Lord Shiva did not want to forgive them so he tried to disappear by sinking into the earth, head first. Yudhistra asked Bheema to grab him as it was very important for them to have his forgiveness. Bheema grabbed him through the tail and tried to pull him out but he did not get successful. Pandavas then decided to build the temple at the same spot which is called Kedarnath.

The temple premises has three segments:

The first one is an open area which is called Prangan where a statue of God Nandi is situated just in front of the main entrance. In the evening everybody gathers in the Prangan for Maha Arti.

The second section is just after entering the temple is the hall with sculptures of pandavas, and other mythological deities

The third section is called Garbh Grah, a conical shaped rock is situated there which is worshipped. Every morning the priest does a massage of deity with original desi ghee.

It is to be believed that the rest of the portion of Lord Shiva appeared at four different places and that is why these five temples are known as Panch Kedar:

The best thing that I liked about Kedarnath was the calmness of the place without any noise pollution of traffic. The only sound which anyone can hear is the sound of nature and Bhajans which play in the temple. When I reached there it was little raining with huge clouds of fog. Till the time I had tea and I settled down it was already 5:00 pm, the weather was very cloudy and it started getting dark. In the evening I attended the Maha arti which was an experience in itself. That night I slept early as it was a very long and tiring day.

The next day I woke up early as I wanted to see morning prayer also. The day was sunny and what I saw behind the temple was a huge mountain covered with snow which was not visible the previous day because of fog. The sight was so soothing to eyes, a mountain covered with snow and the sun rays on that was looking like Gold. I would say it looked like Golden peak. It was giving an impression as a crown on the head of the temple.

That day there was a preaching session going on by one of the very famous saints. I went to attend that. He shared an experience by saying “When I came here the first time and when I was going back I felt like someone was pushing me away from heaven”. I listened to him and I was like the place is wonderful but he is saying it just for the sake of saying as most of the preachers just exaggerate the things.

I still remember there was a sage who was always there near the statue of God Nandi in the Prangan, he was tall more than six feet, wearing a lion skin kind of a sheet with long dreadlocks, red eyes with Trishul in one hand. In the evening after Maha Arti I used to sit with him where he told me so many mythological stories and he suggested that I should visit the nearby places.

I went there for 3 – 4 days and I ended up staying there for 15 days. During the span of my stay I visited so many beautiful places:

Vasuki Taal: It is situated more upwards from Chorabari glaciers at a distance of 5 kms. It is a very tough way to reach there as the weather keeps on changing after every half an hour and there can be snow storms with a lot of foggy clouds. There are chances one can lose track.

Gandhi Sarovar and Chorabari glacier: It is situated behind the temple at a distance of 3.5 kms the way is quite difficult as it is a very steep track.

This was my journey to a place where I want to visit again and again. When I was coming down from Kedarnath I remember the words of that saint and believe me I also felt the same like someone is pushing me away from heaven. The feelings which you feel there can not be described in words, you have to experience it. I went for an adventurous trip and came back with a lot of energy, positiveness, a clean mind and relaxed soul. I would suggest you all visit this place once in a lifetime. You will also feel so much relaxed, energetic and positive as The world needs more of it.

A complete travel guide to Kedarnath

Begin typing your search above and press return to search. Press Esc to cancel.